The Board of Directors of the Fernando Award Foundation has announced the finalists for the 2019 Fernando Awar d. The annual award is given out to a person who exemplifies the very best in volunteerism and service to the communities of the San Fernando Valley.

This year’s finalists (in alphabetical order) include:

Steve Fazio: Steve is the head of Fazio Enterprises which owns the Fazio Cleaners chain that has several outlets in the greater Los Angeles area. He has served as a Los Angeles Police Department Reserve Officer and as a member of the Los Angeles City Fire Commission. Steve was the founding president of Sierra Canyon School, an independent private school in Chatsworth that serves students from early kindergarten through 12th grade. He has had extensive involvement in business education serving in leadership positions for three local Young Presidents Organization Chapters (YPO) as well as being on the Pepperdine University Business School Board and a Senior Fellow at the Pepperdine School of Public Policy. He has been a member of several local Chambers of Commerce, ran for the State Senate in 2016 and is on the board of governors for Providence Tarzana Medical Center.

Jeff Friedman: Jeff has been involved in several organizations for the past several decades many of them involving senior issues including the Alzheimer’s Association-San Fernando Valley and California Southland Chapter where since 1993 he has helped the organization raise millions of dollars. In leadership positions over the past several years, he has helped ONEgeneration -San Fernando Valley meet the growing needs of seniors in the community. He is a founder of SFV MAPS-Marketing and Admissions Professionals for Seniors which is dedicated to raising public awareness and support for senior care and housing in the San Fernando Valley. Jeff has been involved in several other organizations such as the ALS Association, Parkinson’s Association and Stroke Association as well as the West Valley Jewish Community Center.

Mike Quiroga: Mike is the founder of Mike’s Roofing and Building Service which he started after emigrating from Bolivia at the age of 23. Through the years his business has offered advanced training programs to his employees to build leadership skills and further their education. He has also devoted countless hours volunteering and serving on the boards of directors of several local non-profits including Valley Village, Therapeutic Living Centers for the Blind, Mid Valley YMCA, Tierra Del Sol and Mid Valley

American Heart Association. He has been an active member of several local Chambers of  Commerce  and has been on the Los Angeles Valley College Foundation board for several years.

Scott Silverstein: Scott has been a volunteer and Board member at the Child Development Institute (“CDI”) for more than 16 years where he has provided critical support that enabled CDI to create its Early Learning Center. This effort galvanized organizations and business to prioritize the needs of underserved children and families. In partnership with other stakeholders, Scott also helped develop the Reseda Community Network. He was also a critical source in creating the Child Development Center at the Providence Tarzana campus. He also plays a vital role as Chairperson of the Board of El Camino Real Charter High School in Woodland Hills and provided crucial leadership at a challenging time for the school. He has also been involved in the Special Olympics, Woodland Hills-Warner Center Neighborhood Council, Chaminade College Preparatory High School and Cri-Help Inc. and worked on the Warner Center Specific Plan, Promenade 2035 Plan and Reimagine Ventura Plan.

Jane Skeeter: Jane is CEO and Founder of UltraGlas Inc., the premier specialty glass manufacturing company. A VICA Harmon Ballin recipient for community service and VICA Hall of Fame inductee, Jane has been an active supporter of community organizations and causes throughout most of her life. She  has served in various capacities for the West Valley Boys and Girls Club, including co-chair and vice chair of its governance and program committees, respectively, and executive committee member. As a past president of NAWBO-LA, Jane represented the organization in Washington, D.C. as an advocate for women-owned businesses. She has been a member of the Valley Economic Alliance, Val*Pac and served on the West Hills Hospital Board of Trustees. Jane also actively supports local education through her work at Woodbury University as chair of the School of Business Advisory Board and as a supporter of the School of Architecture and Pierce Community College Architecture Advisory Board member, among others.

The recipient of the Fernando Award will be announced during the 61st Annual Fernando Award Dinner Friday, September 27, 2019 at the Skirball Cultural Center in Los Angeles. 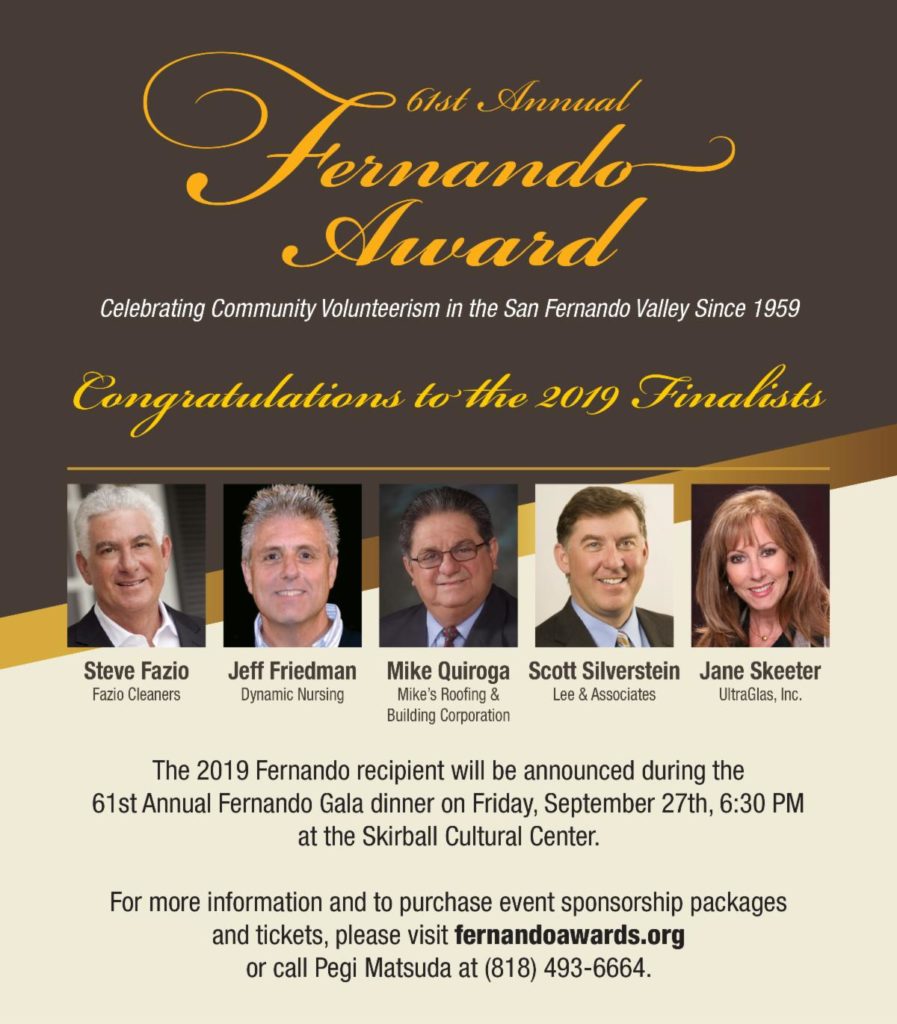