Jane Boeckmann passed away peacefully on April 28th, 2021, surrounded by her loving family, following a courageous battle with Pancreatic Cancer.

Jane was born Floy Jane McCord on November 8th, 1930 in Van Buren Arkansas to parents Albert Lee McCord and Mamie Schuster, and moved to Los Angeles at the age of 11. She always had a love of learning, excelled at local public schools, even to the point of skipping the 8th grade and still going on to be named Valedictorian. She went on to two years of university study in Edinburgh, Scotland.

Jane Boeckmann was truly the beloved matriarch of the Boeckmann Family and the
First Lady of the Galpin Motors organization. She was an amazing and dynamic person with a fascinating background, and a true one-of-a-kind who lit up a room the moment she entered it. Jane was truly a woman of unwavering faith, limitless energy and boundless optimism, as well as a selfless humanitarian, civic leader, and astute businessperson.

Jane had a special and unique touch that was applied to everything she endeavored. For example, Jane wasn’t just a gifted interior designer, but she designed the interiors for a series of motor homes that became the #1 motorhome in their class statewide. She didn’t just play golf, she hit 2 holes in one, including one on the famous 6th hole of the Riviera Golf Club. Jane didn’t just fly in airplanes, she was a licensed pilot who flew cross country. Jane didn’t just drive nice cars, she was part of a Galpin Race team that broke a 24-hour Endurance race land speed record at Willow Springs. And Jane wasn’t just a loving family member and friend, she was deeply devoted to others and someone who could always be counted on to be with you through good times and bad.

Jane Boeckmann is perhaps most recognized for her role at the Galpin Motors automotive organization, where she has served for many years as Treasurer and Corporate Director, and worked side-by-side with her husband Bert building Galpin Ford from a small dealership into the #1 Volume Ford Dealership in the world and the most recognized automotive family in the country. The heart and soul of Galpin has been a combination of Bert and Jane, and Galpin’s success is her success.

Jane founded the highly successful Valley Magazine, and served as Publisher and Editor-In-Chief for 25 years. For Jane, this was not just a business venture, but it was part of her unwavering devotion and commitment to the community that she loved. She also founded and published Valley Brides Magazine, which was also a successful publication.

Jane’s sincerity of heart and caring for others was felt not only in her local community, but also throughout the state, nation, and even throughout the world. Providing financial support to literally hundreds and hundreds of worthy causes was not enough for Jane. She always gave of herself. Whether it was assisting in the daily needs of food, clothing and shelter to those in her own community, to sending and personally overseeing the delivery of medical supplies and other humanitarian aid in Europe, providing other relief to the people in portions of West Africa, or personally visiting and providing support to an orphanage in Russia under the auspices of Mother Teresa, Jane Boeckmann truly lived a life of service and sacrifice before self.

Jane’s long and distinguished record of local community involvement was boundless, and just a small sampling or her service and leadership positions include serving as a Trustee of the Valley Industry and Commerce Association and also King’s College, as well as a Board Member of such diverse groups as the Valley Economic Alliance of the San Fernando Valley, Valley Presbyterian Hospital and the Salvation Army. Jane has also held key roles in organizations such as the Olive View Medical Center Foundation Advisory Board, Excellence in Media, the Heart Foundation and many more groups that benefit communities and those in need.

While the good deeds that Jane Boeckmann did throughout her life are seemingly endless, and while Jane was very humble and unassuming in her philanthropy and all that she did, many honors and awards were bestowed upon Jane by those who wanted to recognize and thank her for the difference that she made.

For example, Jane Boeckmann was the first woman ever to receive the highly coveted Fernando Award, which is widely regarded as the top recognition for community service in the San Fernando Valley. She received the Star of the Valley Award from the Valley Economic Alliance, the Free Enterprise Award from the San Fernando Valley Business and Professional Association, Woman of the Year Award from the American Business Women’s Association, the Angel Award from Religion in Media, the Jack Webb Award from the Los Angeles Police Historical Society, the Humanitarian Award from New Directions For Youth, The Love of Children Award from Child Help U.S.A., the George Washington Honor Medal from the Freedoms Foundation at Valley Forge, California Mother of the Year from American Mothers, Inc. and so many more well deserved forms of appreciation and recognition.

Jane is survived by her soulmate and husband of more than 50 years, Herbert F. (Bert) Boeckmann II, as well as daughters Laverne & her husband Arisa and Denise & her husband Kenny, sons Brett & his wife Betty, Brad & his wife Teena, and Beau & his wife Mary. Also 12 Grandchildren, Dascha, Jacob & his wife Crista, Amie, Brandon & his wife Alexis, Blake & his wife Faith, Brooke, Amelia & her husband Levi, Logan, Bliss, Brielle, Beau and Blair, as well as 7 Great-Grandchildren, Brody, Violet, Anna Bell, Brayson, Brynlee, Bronson and Pate, Brother-in-law Karl and Sisters-in-law Thyra and Gloria. There are also many extended family members, including but not limited to those in the Boyd and McCord families. 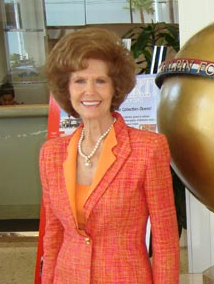