Valley Volunteer Comes to the Rescue of Fernando Statue

His Northridge Beautification Foundation initiated a project which spread citywide where neighborhoods are kept clean at the same time homeless residents get a helping hand. The environment and sustainability are always on his mind.

That’s why when the Fernando obelisk in Warner Center Park in Woodland Hills needed some help, Larson was right there. The statue, which bears the names of more than 60 years of Fernando Award recipients, was hit by graffiti bandits this summer as the nation experienced protests demanding social justice after the death of George Floyd in Minneapolis. The obelisk also had some structural problems.

So for several days during the hot summer months, Larson headed over to the park early in the morning and painstakingly cleaned the statue and tried to get a handle on the structural issues. The marble part of the obelisk has shifted causing the tile at the bottom to start pulling out, Larson said. “I would work from sunup until probably 9 or 10 a.m.,” Larson said. He did the work by himself because of safety concerns during the pandemic. “I have respect for Fernando and what it means,” he said. He has also done work cleaning the original Fernando Award statue in the government center in Van Nuys. “I keep my eye on that, too,” Larson said. Randy Witt, Chairman and CEO of the Fernando Award Foundation, stated, “We were all so impressed by Don’s generosity and dedication.” On behalf of the Foundation, Witt personally called Larson “to express our deep gratitude for his incredible efforts.”

A Valley native, Larson started the Clean Streets, Clean Starts program which beautifies Valley neighborhoods by making sure sidewalks and medians are taken care of through picking up trash, painting fire hydrants and weeding. His group has also put yellow benches on sidewalks to make things look cleaner and brighter. The program uses the help of homeless citizens who in return are given cards to help them buy food and other necessities. They also receive help in contacting local social services. The City of Los Angeles implemented that program in a broader form throughout the city. Larson’s foundation gets help from the offices of city council people and other city departments, California State University, Northridge and resident volunteers.

Larson received the first Fernando Impact Award in 2018 for his volunteer efforts that help improve the quality of life in the Valley. “He is the spirit of what Fernando really is on volunteerism,” said David Honda, a member of the Fernando Award Foundation’s board of directors who was the board’s point person with Larson on the rehab of the monument. “He is quite a warrior for our community. I appreciate what he does.”

Larson believes in taking care of our community as well as the environment. “I channel myself to the environment and sustainability,” he said. And he has many friends throughout city hall, CSUN and elsewhere to help him get his work done. Currently he and these entities are working on a “Pollinator Project” to address the declining habitats of pollinators like bees and hummingbirds by using under-utilized city-owned property to help them proliferate.

He is also working on a project funded by Proposition O that deals with storm water management and the cleaning up of local waterways. “We’re making lots of progress and there are very beautiful things happening,” he said.

As for Fernando, Larson said he’ll continue to make sure the foundation’s two statues are taken care of. “I feel so good about the Fernando people,” he said. “They have done good things for the community in big ways.” 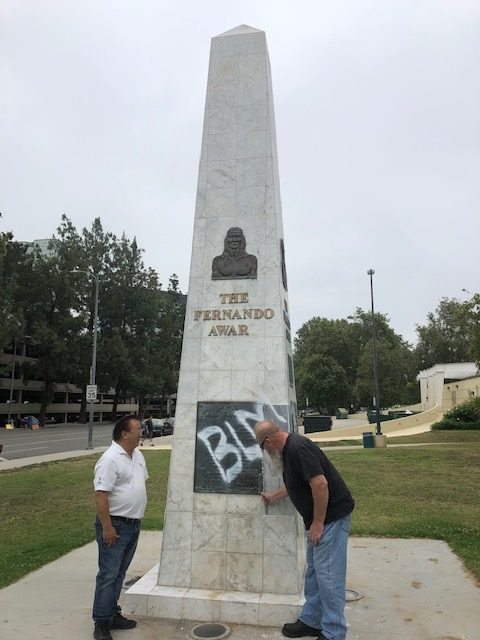 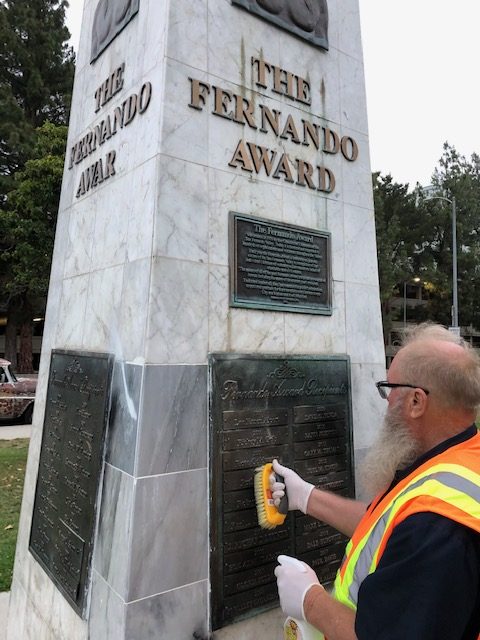 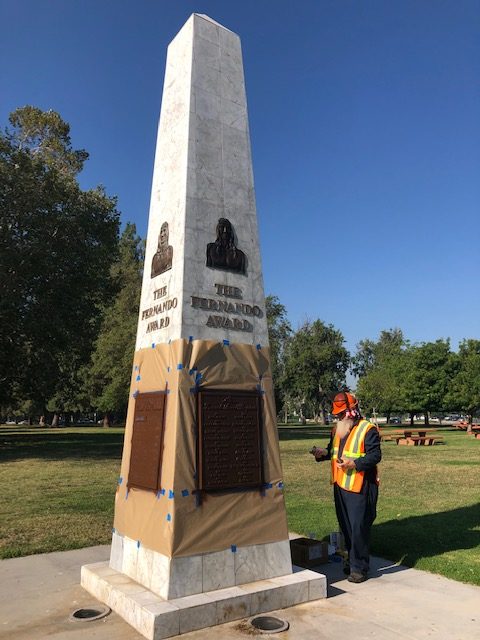 Don Larson protects the bronze as he works on the marble 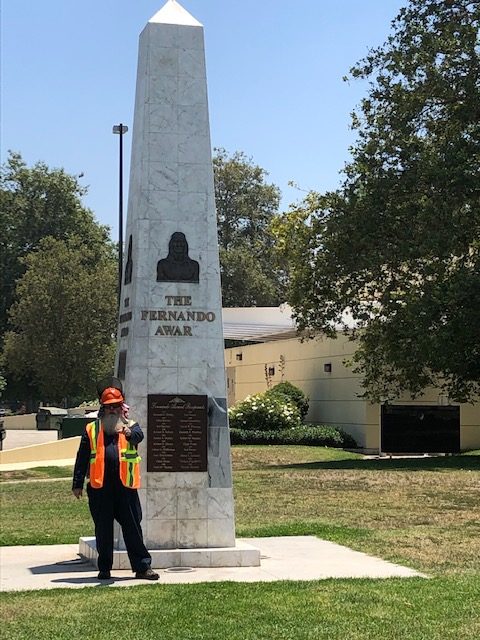 Don Larson stands next to the Fernando obelisk after refurbishing it 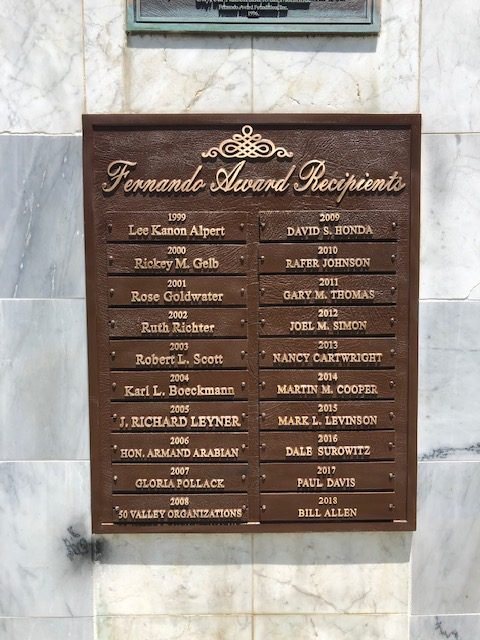 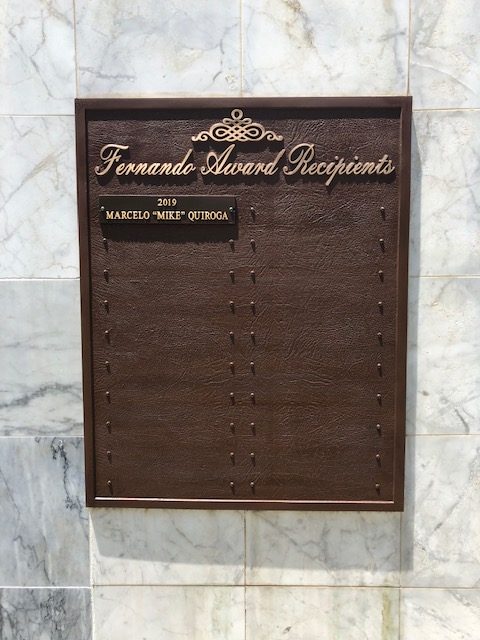 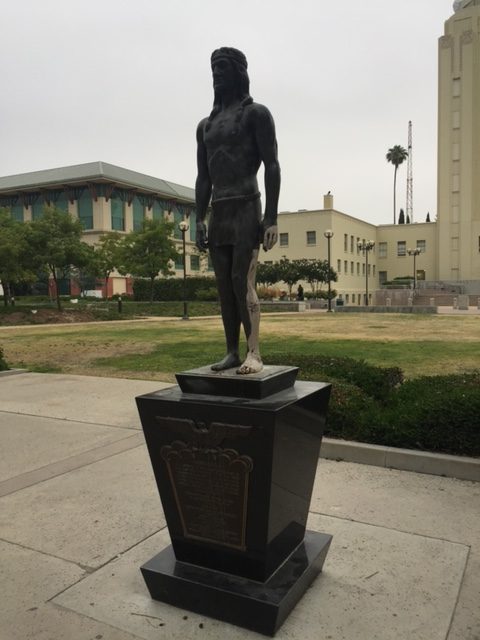